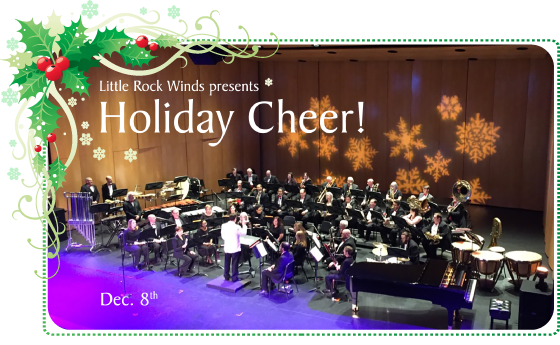 Music Director Israel Getzov will lead the band with a full slate of guest artists.  Soprano Jaimee Jensen-Loving and baritone Kendi Jensen-Loving of Conway will perform a medley of Christmas songs from the 1950s and will present the perennial favorite, “O Holy Night” by Adolphe Adam.

The 49-member A Capella Choir of Sylvan Hills High School, directed by Elaine Harris, will join their cheerful voices with the winds in Christmas on Broadway, a medley of Christmas show tunes including “It's Beginning to Look a Lot Like Christmas”, “Pine Cones and Holly Berries”, “March of the Toys”, “My Favorite Things”, “We Need a Little Christmas” and “God Bless Us Everyone”.  The choir will also perform an a capella setting of Winter Wonderland.

Rounding out the show with dance, Untapped, Inc., directed by Matt Boyce, will tap dance their way through a holiday swing medley.  And of course, Santa is scheduled to make an appearance.  Brent Walker, concert moderator, will keep the program moving and everyone informed with his colorful commentary.

Concert sponsors are Dr. Rich and Dottie Brown and Tim and Joan Blann.  Tickets are $20 for adults, $5 for students, and are available online at lrwinds.org/holiday-cheer.

The Sylvan Hills High School Choirs, under the direction of Elaine Harris and assistant director Alexa Wilson, consistently receive Division I – Superior Ratings at regional and state competitions as well as Sweepstakes and Best in Class ratings at Arkansas State Choir Festival.  The choirs have performed 6 times in New York City at Lincoln Center and Carnegie Hall and in Washington, D.C.

Harris is in her 39th year at Sylvan Hills High School.  She was named the Senior High Choir Director of the Year for the Arkansas Choral Directors Association Central Region in 1998-1999, 2011-2012, and again in 2021-2022.  She was the Pulaski County Outstanding Teacher in 2012 and the Sherwood Chamber of Commerce Educator of the Year in 1999.   In 2017 she received the National Federation of High Schools Outstanding Music Educator Award.

Alexa Wilson is the assistant choir director of Sylvan Hills High School and Junior High.  She graduated from the University of Central Arkansas in 2021 with the Bachelor of Music Education.  She also teaches piano and voice lessons. She created a gospel choir as another opportunity for her students to express themselves through music.  Her students received 1st Division ratings at the region and state level last year.  In her spare time, she plays drums and composes music.
Sylvan Hills High School is part of the Pulaski County Special School District.

Israel Getzov has been the Music Director and Conductor of the Little Rock Wind Symphony since 2015.  He is also the Music Director of the Conway Symphony Orchestra, and previously held the position of Associate Conductor of the Arkansas Symphony and Principal Conductor of the Tianjin Philharmonic, the resident orchestra of the Tianjin Grand Theater.  Mr. Getzov has conducted orchestras throughout the United States and abroad including Abilene Philharmonic, Asheville, Symphony, Cleveland Pops, Monroe Symphony, Skokie Valley Symphony, Shanghai Philharmonic, Symphony of the Mountains, Tianjin Symphony, Zhejiang Symphony Orchestra, Bolivia Classica, University of Taipei Symphony, and the Encuentro Jovenes Musicos Festival in La Paz, Bolivia.  As an opera conductor, he led the world premiere of The Scarlett Letter by American composer Lori Laitman, conducted works of Giancarlo Menotti at the Shanghai Oriental Arts Center and the Cleveland Institute of Music, and worked as Staff Conductor for Tianjin Grand Opera in productions of La Traviata, Il Trovatore, Rigoletto, Bluebeard’s Castle, and Oedipus Rex.  Mr. Getzov was selected by Leonard Slatkin to conduct the National Symphony Orchestra at the Kennedy Center in Washington, D.C. and was chosen by David Zinman for the American Academy of Conducting at the Aspen Music Festival.

Mr. Getzov started the violin at age 3, and later studied viola, piano and percussion.  He has performed as an orchestral violinist with many renowned conductors including Barenboim, Boulez, Solti, Mehta, Jansons, and Rostropovich.  He was a founding member of the Rockefeller String Quartet, a professional quartet with whom he gave over 200 concerts.  An in-demand educator of ensemble techniques, Mr. Getzov holds a tenured professorship at the University of Central Arkansas and has given clinics at many schools in the U.S. and internationally.  An experienced speaker, he was the host of his own weekly radio program on Arkansas KLRE 90.5FM called “Izzy Investigates” and he has also performed live as a chamber musician on WFMT and WBEZ in Chicago.

Little Rock Winds was founded in 1993 to recognize the diverse heritage of the wind band tradition in Arkansas.  It is dedicated to providing Arkansas communities live wind band music, including a variety of compositions and transcriptions that inspire audiences, challenge the players, and preserve the wind band tradition.  LR Winds is an important outlet for the wind and percussion musicians in the central Arkansas area.  The approximately 48 professional and semi-professional musicians are selected by audition and participate for personal development and enjoyment and as a service to the community.  Six concerts are performed annually in Little Rock, and the band has performed statewide, from Texarkana to Cherokee Village, Harrison to McGehee.